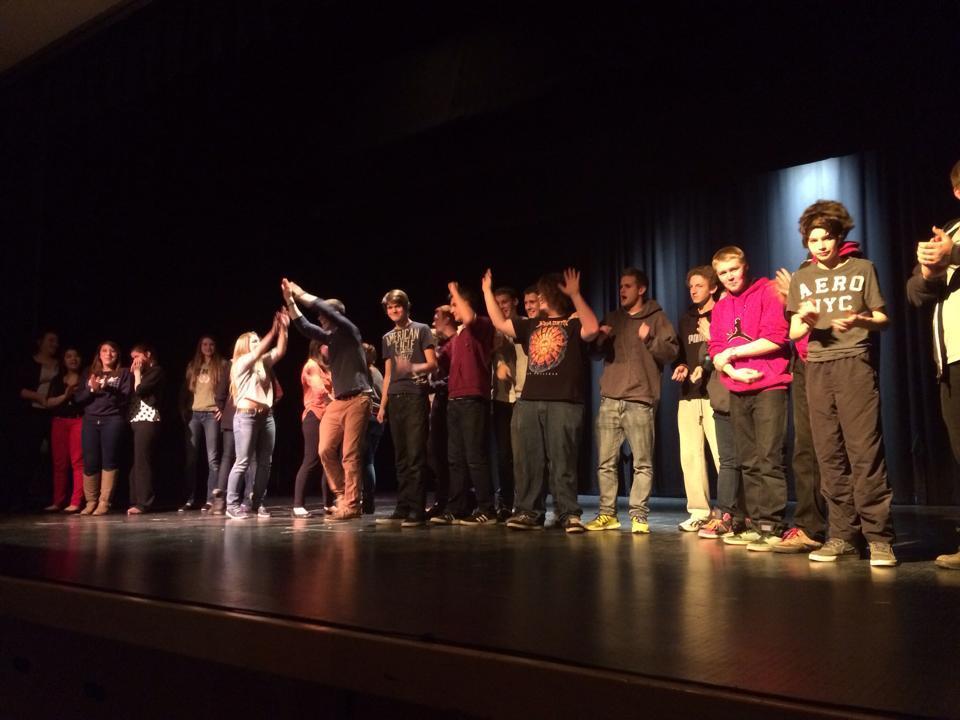 (The Cast and Crew of "BULLY" our 2014 stage production, winner of multiple awards including
two Awards of Excellence from The Catholic District School Board of Eastern Ontario as well as an
Outstanding Achievement Award from Theatre Ontario)

The St. Michael Secondary Drama Program is available to all students from Grades 9 to 12. It takes
an activity based experiential approach to the teaching of performance and dramaturgy which is
accessible to all regardless of prior experience or knowledge of the craft of theatre. Recent graduates
of the program have gone on to be accepted to the top theatre school in the country while many
graduates follow other educational and career paths, secure in the knowledge that the performance
skills they have gained in the program can be applied to any field of endeavor which they choose to
follow. There are few career options which do not highly value confidence, self-assurance, presentation
and speaking skills as well as the ability to think on one's feet and effectively respond to challenges. These
are the skills emphasized in each class.

Drama classes at St. Michael Catholic High School take a "learn by doing" approach and are high energy
and active. Students are challenged to always perform at the peak of their ability and report that Drama class is often the high point of their academic day.

"I didn't realize how much there was to learn - and how fun it would be to learn it." - Grade 9 Student

"This is the best class I have ever taken. Sometimes it's my reason to get out of bed!" - Grade 10 Student

"After taking Drama I'm a much more confident person, not just on stage, everywhere else in life too." - Grade 11 Student

"I am hoping to be a lawyer but I know that I will be using everything I ever learned in Drama in my future
career." - Grade 12 Student

(the poster for our stage production "STAY WITH ME", winner of two Theatre Ontario Awards and a CDSBEO Award of Excellence and which played to over a thousand people in the Spring of 2015)

Over the past several years we have grown a reputation for innovative and relevant stage productions which draw enthusiastic audience support and which have won multiple awards both in Eastern Ontario as well as provincially.
Making this achievement particularly impressive is the fact that Mustang Drama productions are entirely written, cast, directed and performed by students. Each of our plays is written by student authors and we feel that this not
only makes them meaningful to modern audiences but produces work which is relevant and exciting. We have the talent right here in our school - why not provide the opportunity for the production of original work?  The extra-curricular aspect of Mustang Drama operates all twelve months of the year. Each new play begins pre-production while the current production is still ongoing. Stage productions engage students in the following roles:

and involvement is not restricted to students in the Drama program. All students are welcome to audition or to
apply to serve in other production roles. Auditions are held in October of each year. Daily rehearsals take place
from October to December and twice daily rehearsals (lunch and after school) from January to May.

"That was not what I expected at all. I came here expecting to see a high school play, you know. That was nothing
like I thought it would be. That should have been on the stage in Toronto or New York. Wow." - audience member